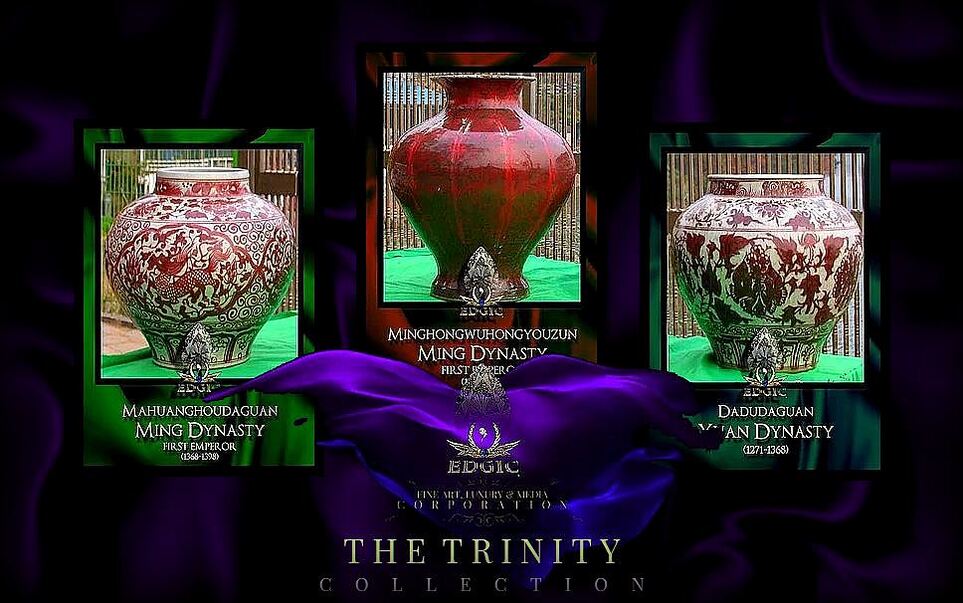 China, with its vast lands, large populations, and ancient history, was now ruled by a Mongolian horde of only a few.  China, that empire of historical resistance had been conquered by their Mongolian invaders.  And now, China would experience a harsher brutality by the Mongolian Empire's rule, one of harsher sufferings, more than China had ever known.

The Mongolian Empire inflicted severe damage and destruction everywhere throughout the lands as the Chinese revolts and rebellions spread. Though the Chinese people suffered much destruction and enormous casualties, they still resisted the Mongolians

Then Beijing fell. The Ming Royal Family treasures in Nanjing, were moved when Beijing (the Ming's Capitol City), had fallen in a Manchurian surprise attack upon Beijing. These Three Ceramic Treasures of the Ming Royal Family were removed from their depository at the Great Baoen Temple (a Buddhist Temple in Nanjing), and moved to a protected safe zone. it is here that these rare Ming Dynasty treasures have been kept safe and protected from those events that shaped history. 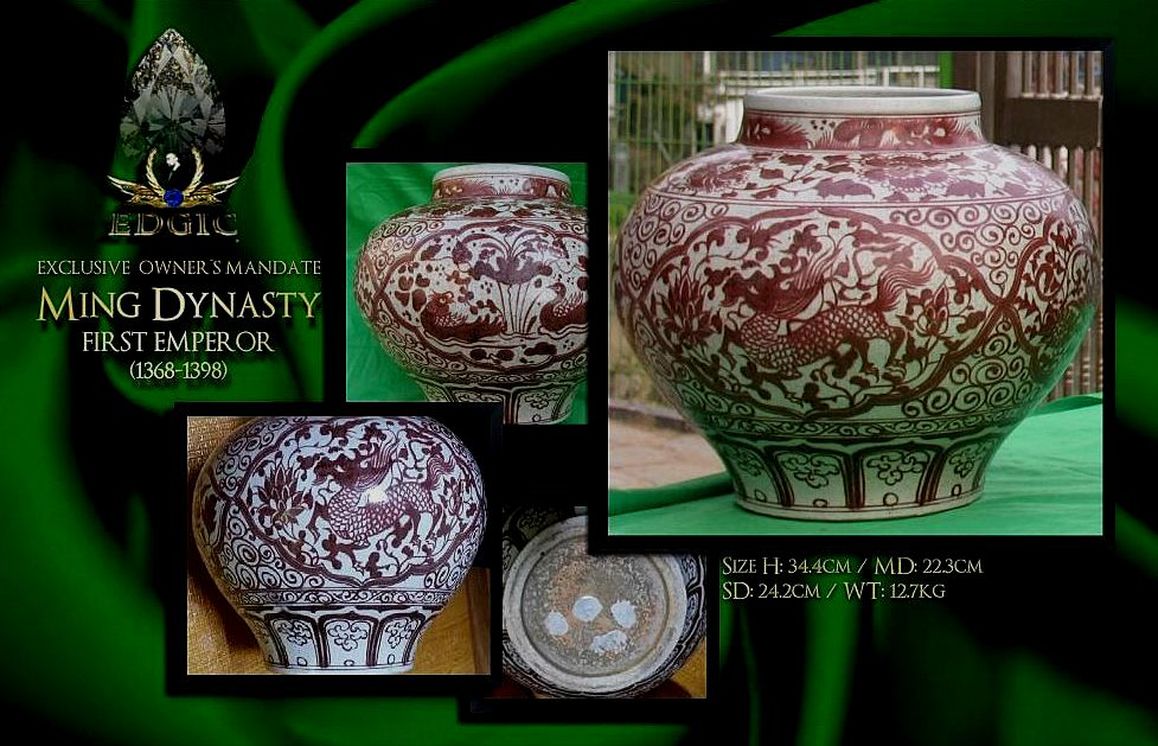 This extremely rare and exquisite Imperial Chinese ceramic of the Empress Ma has four distinct symbols.
1) The Unicorn or the Qilin 麒麟) The Unicorn is an animal that symbolizes the auspiciousness that appears and is found in the Chinese ancient legends. The Unicorn's shape is similar to that of a deer, and has a horn, a tail, and has a scaled leather body (form).
2) The Phoenix. The Phoenix symbolizes the Imperial Chinese Empress Ma.
3) The Mandarin Duck. The Mandarin Duck symbolizes the conjugal harmony (and 4) which was sculptured in four lattices on the outer surface of this ceramic. 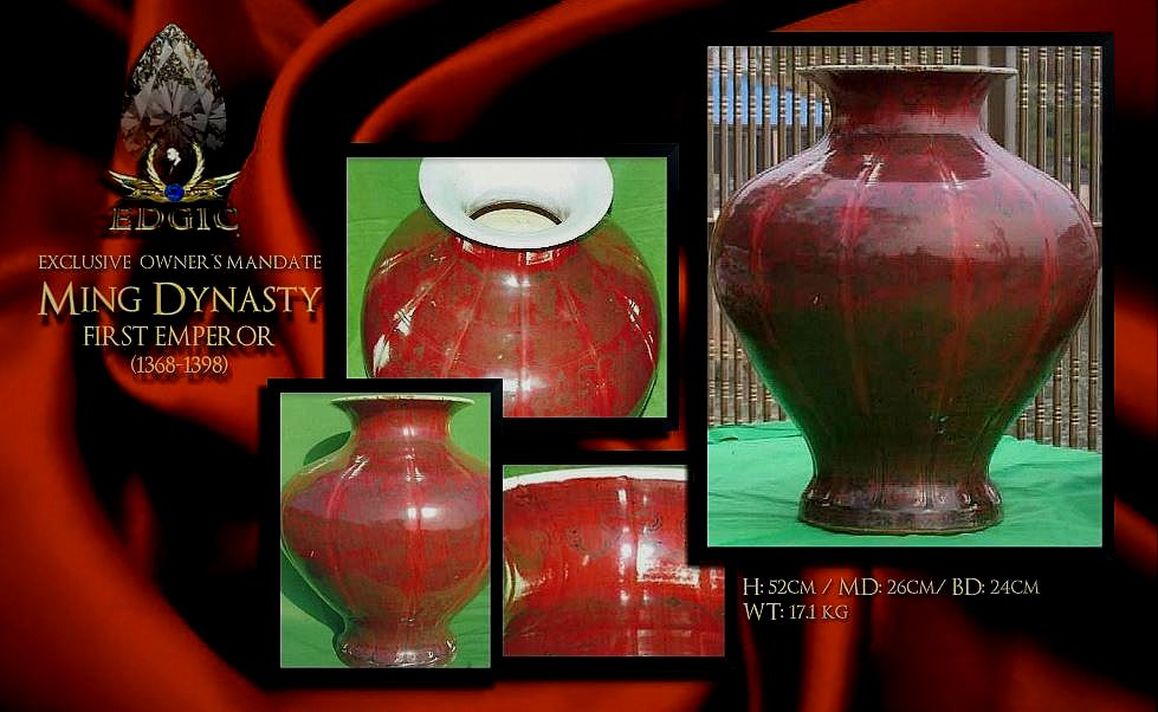 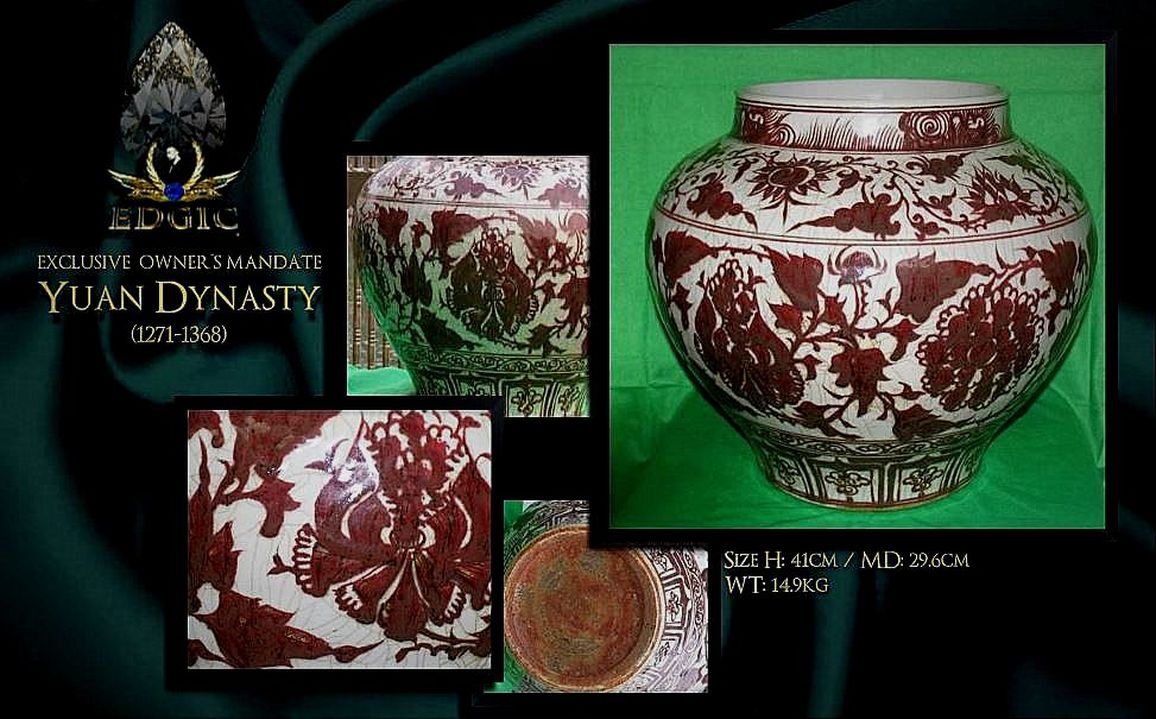 EDGIC Fine Art, Luxury & Media Corporation LLC (EDGIC) holds the Owner´s mandate to THE TRINITY Collection . EDGIC has and maintains the rights under law, to prosecute, litigate, and seek financial damages for any and all violations to these rights, not limited to and including all claims of other individual and parties, to represent and present and try to sell any and all of these mandated items listed here, especially the above mentioned Collection as their individual and personal own, or to represent to sell. Violations of any and all of rights will subject said perpetrator(s) to immediate legal action and damages UNDER THE FULL EXTENT OF THE LAW for this intentional criminal act of committing fraud and misrepresentation by not having EDGIC Fine Art, Luxury & Media Corporation Company expressed written consent to do so.